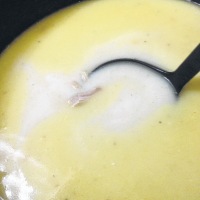 When you grow up eating a certain dish, you may not realize that it’s not something known all over. It may, in fact, be a regional dish specific only to where you were raised. This could be the case with our chicken stew here in Yadkin County. From what I can tell from polling friends near and far, our version of chicken stew is specific to Yadkin, Surry and Stokes counties.

As any native Yadkin County resident knows, chicken stew is a soup made from chicken broth, milk, butter, plenty of salt and pepper and served with saltine crackers. The term chicken stew can also refer not only to the soup itself, but to a gathering of friends and family enjoying the soup.

“In Yadkin County where I grew up, [chicken stew] means an event — family, friends and neighbors gather on a cool fall evening to share the stew, which is cooked in a big black pot over a fire. The stew itself is simple — chicken, water, milk, butter, seasoning. The event also could include wieners roasted over the fire, and plenty of desserts contributed by everyone. Each person is also encouraged to bring his own bowl. Of course, the stew can also be cooked in the kitchen, which my mama often did for winter Sunday dinners. It was just as delicious, but without the fellowship of a large gathering outdoors,” explained my friend Gray.

For non-Yadkin natives, this dish and event are often confusing. My friend Bill who grew up in Elkin, but in the Wilkes County section, said he did not grow up eating or going to chicken stews and once he figured out what a chicken stew is, he now avoids them at all cost.

“I can’t get too excited about an evening whose high point will be a bowl of hot, chicken-infused milk with a few saltines and maybe some hot sauce as a last desperate attempt at flavor,” Bill said. “Chicken stew, which is a misnomer, by the way, a stew is a thick, hearty, chunky soup, is pretty lame even as a first course. As a complete meal, it’s totally unacceptable. I am completely baffled by its popularity.”

For those who do love a chicken stew, it can become a quandary if they move away to a non-chicken stew serving locale. Nicholas told me that growing up in Yadkinville, chicken stew was just a normal part of life.

“It wasn’t until I moved to Seattle in my twenties that I realized it was a local tradition,” Nicholas said. “I would ask my coworkers if they knew of anyone hosting a chicken stew and they would look at me like I was crazy. It was difficult even to find any information online. I ended up having to call friends and family in NC to tell me how to make my own.”

My research at first was leading me to believe that chicken stew was only found in Yadkin County, but thanks to Jessica, I know that Surry and Stokes county folks enjoy it as well.
“I love chicken stew!” Jessica Johnson told me. “It is a milk-based stew with shredded chicken. There are no veggies or other meats added. Usually served with regular saltine crackers, salt, and pepper. I’ve had one that had red pepper flakes in it and it was good, but that is not the traditional way to make it. I grew up in Surry County — graduated from North Surry High School. I grew up eating it at church suppers, get-togethers, and fundraisers in Surry and Stokes County.”
Jessica J. also said that Stokes County hosts the World Championship Chicken Stew every year at a park in King.
“It’s awesome and you get to sample a ton of different chicken stews made by local organizations and church groups and then vote for your favorite,” she said.

My friends who grew up in the eastern part of the state were a bit confused about our chicken stew.
“Is that the same as chicken bog?” asked my sorority sister Jessica W. I told her I wasn’t sure, because I had never heard of chicken bog.

“Chicken bog is a big deal in Robeson County, but maybe that’s because we’re on the NC/SC border,” Jessica W. told me. “My dad usually adds onions, green peppers, carrots and mushrooms in with the chicken, smoked sausage, and rice. Delish! We also cook it outside in the big black pot. I swear it tastes better that way! We usually make a big pot of chicken bog whenever we have a big family gathering.”

Donna, who grew up in Cary, said she was more familiar with Brunswick stew.
“The best must be made with hens, no males allowed. Full of chicken, butter beans, corn and vegetables. The best is from Nash County where my grandparents lived,” Donna said of Brunswick stew.

My godmother Connie also said she was a fan of Brunswick stew.
“In the Eastern part of NC, Roxboro, where I grew up, church groups and civic organizations in the fall would make huge cast iron pots of Brunswick stew to sell for fundraisers,” Connie said. “The women in the group would cook the meat and supply all the ingredients the day before and the men would stay up all night cooking the stew in the black cast iron pots outside over an open fire. They used long wooden paddles to stir the stew continuously while it was cooking so that it wouldn’t stick or burn on the bottom.”

So just how did the chicken stew specific to our area come to be? Luann said she has a good idea.
“Our family would have chicken stews at the end of tobacco season. I think it was an inexpensive way to celebrate completing the harvest because most families had chickens,” Luann said. “My Dad’s sister and her husband, in East Bend, always had them in the fall after all the tobacco was finished. They had huge cast iron pots and cooked the chickens over an outdoor fire. Sometimes we also had oyster stew in a smaller cast iron pot. All the families brought sides, desserts, drinks, etc. My Mother’s family, the Kimmers, in Jonesville, also had them but not as traditionally as the Williams family. That was a fall tradition. Our chicken stew was whole chickens cut up and stewed in water, butter and seasonings to make the broth with milk added for the stew. I remember having stew with no thickening added and having stew with a flour slurry (they call it now) to thicken the milk/broth. We always had saltine crackers with it. The meat was left on the bone and you tried to get a drumstick/thigh/breast in your bowl of stew. It just seems to taste so much better when cooked over an open fire with family!”

I think Luann is right on the money about chicken stew stemming from an inexpensive way to feed a lot of people. A number of meals that hail from another time came about in this manner and I think this is definitely the case with our chicken stew.
Glenda found a great article for us that indicates that chicken stew actually originated in northern Georgia, where it is known as chicken mull. You can find an in-depth article on the subject at http://www.seriouseats.com.